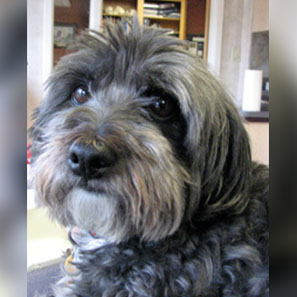 “Hi, I’m Cooper! I am a Delta-certified therapy dog. I had to take intensive classes to learn how to become a therapy dog and even had to take a test! It was all worth it though, because now I get to snuggle with patients and comfort them when they are nervous. Our doctors are the best owners a dog could ever have! They make sure I am never left alone. They bring me to the office and take me on trips to the hospital, schools, and long-term care facilities to make new friends. I love getting massaged and pet all day — it’s the best part of being a therapy dog. And let’s not forget the treats!” — Cooper

Cooper is indispensable in Drs. Perry and Gary Opin’s orthodontic practice in Milford. Every day, he shows up to work with a cheerful disposition that never fails to soothe patients and reduce their anxiety levels.

The three-year-old, 17-pound pup is a Cresteepoo. Soon after Gary received Cooper as a gift, he brought him into the office. Gary and his father Perry immediately saw Cooper’s potential. Cooper was a natural around the patients, who loved him. So Gary began researching how to make Cooper a legitimate member of the staff as a certified medical therapy dog.

To achieve this certification, the Opins enrolled Cooper in a class through Delta Society, a national certifying organization dedicated to improving human health through therapy and service animals. Now that he is certified, Cooper is a regular sight around the office, and his services are invaluable. The Opins treat a considerable number of patients with cleft lip and palate and other craniofacial disorders.

“These patients have had many surgeries and they do not trust anyone in a white coat,” Perry said. Recently, he was working with a 4-year-old girl who has a hole in the roof of her mouth. He needed to take an impression so he could fit her with an obturator. “Cooper jumped into her lap, and it was like anesthesia.” From that point on, Perry had no problem completing his task.

“Cooper is one in a million,” Gary said. “He just goes to any person who is nervous and puts his head in their lap.”

His charms have also extended into the community. For example, Cooper has completely won over the local FedEx driver.

“As soon as he see Cooper, he breaks into a wide grin and has a treat ready for him. If he sees us walking Cooper, he’ll pull over his truck and give Cooper a treat,” said Perry.

The Opins often take turns caring for Cooper at night. “Cooper usually goes home with me, but my parents fight me for him,” Gary said. “He’ll spend one or two nights a week with them.”

Although he is well-loved and the hero of the office, Cooper has one minor flaw to which Perry will admit. “He’d leave me for a treat any day of the week,” he said.

Reprinted with permission from the American Association of Orthodontists.